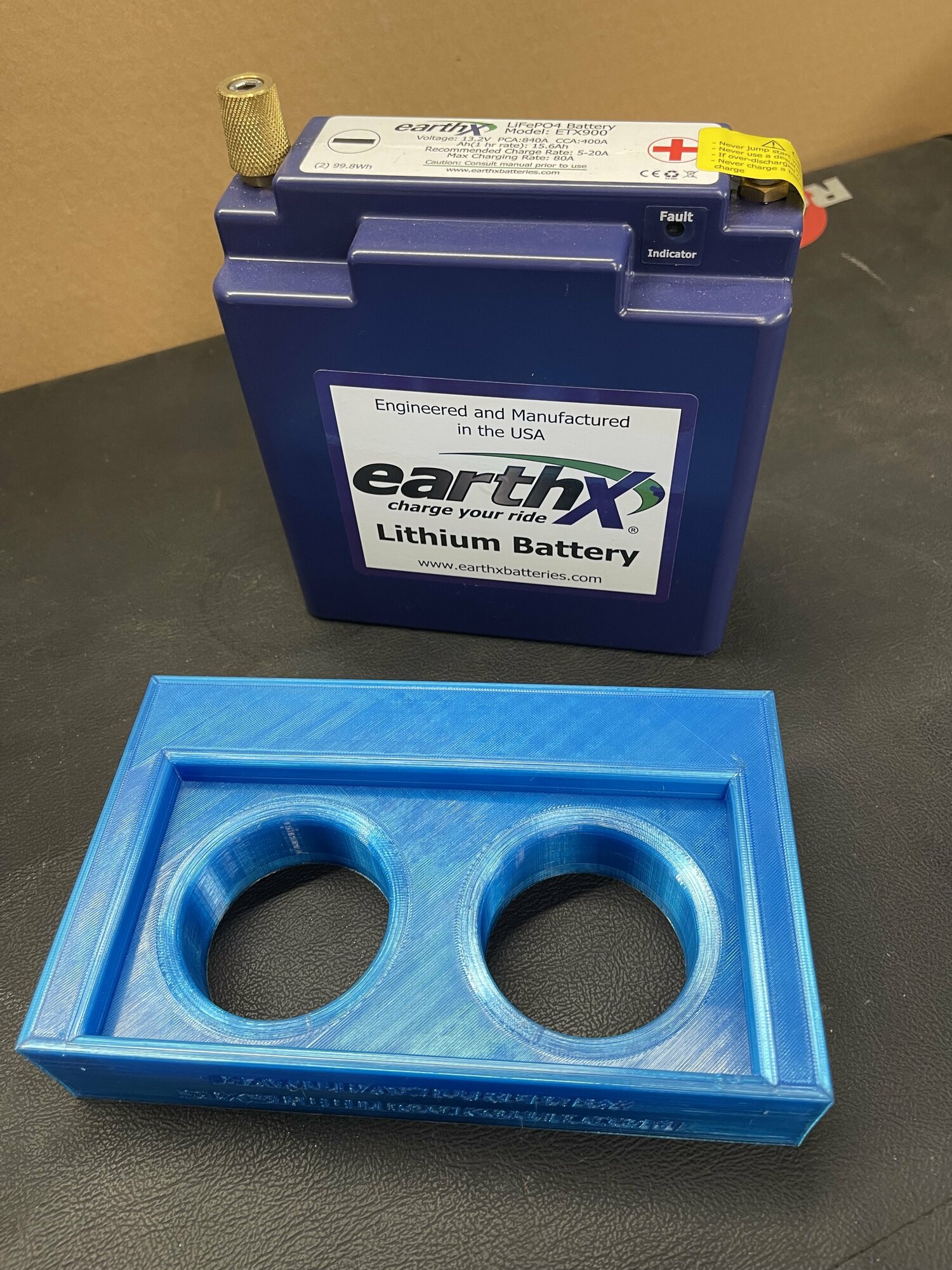 Is this the kit that MPP sells?

Similar, but the MPP kit has a mounting bracket that’s machined out of aluminum. This one has a plastic, 3D printed base that seems to allow the use of the OEM battery bracket.

The stock battery is 45Ah, while that one is 15Ah, about 1/3rd the capacity.
Does the car throw any errors for this? Seems like it would quickly identify it as a very worn out battery given it will have to charge it much more often.

The EarthX battery does not actually have less usable capacity. A lithium iron phosphate (LiFePO4) battery’s capacity is almost 100% usable. Let’s say it’s 90% usable because you don’t want to discharge it all the way. Then the EarthX has 13.5Ah usable capacity.

A lead acid battery capacity is not anywhere near 100% usable unless you want to permanently damage the battery. On a deep cycle battery, you could possibly use up to 80% of the capacity with a reduced life or up to 50% of the capacity for increased life. That would be 22.5Ah to 36Ah of usable capacity in the OEM Tesla battery if it were deep cycle, but I’m pretty sure it’s not. For a regular lead acid battery, you do not want to use more than about 30% of it’s capacity or it will decrease it’s lifespan by a lot. On the OEM Tesla battery that would be about 13.5Ah of usable capacity. See how that matches exactly with the EarthX’s usable capacity as explained above?

Tesla does not “look for” aftermarket batteries to pop up an error or cause problems. Tesla programs their charging system to only work with their OEM batteries, and aftermarket LiFePO4 batteries behave differently. Tesla notices the different behavior and thinks your OEM battery is on its way out.

In general, LiFePO4 batteries are good replacements for lead acid batteries because their voltage ranges are about the same for both, but not always. I installed a battery monitor on my Model 3’s OEM lead acid battery last summer and have been watching it periodically. Mine never discharges more than 8%, so Tesla definitely does not treat it like a deep cycle battery and uses it more like a starting battery. I also noticed a change to how Tesla charges the battery towards the end of 2021, with an increased top-end voltage of 14.9V versus the max of 14.4V that I had seen before. The reason for the higher voltage could be due to colder temps (charging voltage should be adjusted for temperature), but Tesla changed the behavior with software updates so I don’t know for sure. But that higher voltage likely causes some of the aftermarket LiFePO4 battery BMS circuits to disconnect it for being too high. This is what likely happened with the Ohmmu aftermarket batteries this winter where some people started having warning messages pop up on their Tesla. On the EarthX at least, the maximum charge voltage is listed as 15V before the BMS disconnects it.

One reason I don’t think I would install a LiFePO4 battery in my Model 3 is because in the summer, the car floats the battery voltage at around 13.4V once it’s fully charged. On a LiFePO4 battery, 13.4V is about 20% charged compared to a lead acid battery at 100%. If you read the EarthX datasheet, it recommends charging the battery at 13.9 -14.6V.

How Lengthy Will You Should Pay Again Your Enterprise Mortgage?