If you’re an aspiring pharmacist, you probably have a long list of wants and needs in a pharmacy school. You’d like a top pharmacy program with stellar faculty members and, because you want to put your four years of training to good use, you need a school that boasts a high rate of graduate employment and commands a great salary. After all, top pharmacy programs don’t come cheap.

Your tuition bills and mandatory student fees will certainly add up over four years. So, along with a degree, your future likely holds a fair amount of student debt. The AACP also reports that Pharm.D. graduates carry an average of $157,425 in student loan debt. For grads of private pharmacy schools, that figure shoots to $182,417; for students of Pharm.D. programs at public colleges and universities the loan debt average is slightly less, at $131,153. But the good news is that graduates also earn solid salaries. According to the Bureau of Labor Statistics (BLS), the median salary of pharmacists was $121,500 in 2015.

To help you decide which program is best for your career and financial goals, we’ve crunched the numbers from more than 19,000 student loan refinance applications from January 2014 to February 2017 to bring you the SoFi Return on Education (ROED) Pharmacy School Rankings.

Here’s our prognosis for your pharmacist education.

Pharmacists play a major role in the healthcare industry, and most command salaries well over $100,000. If you’d like a six-figure paycheck after you earn your Pharm.D., check out our list of the top 20 schools producing the biggest earners. 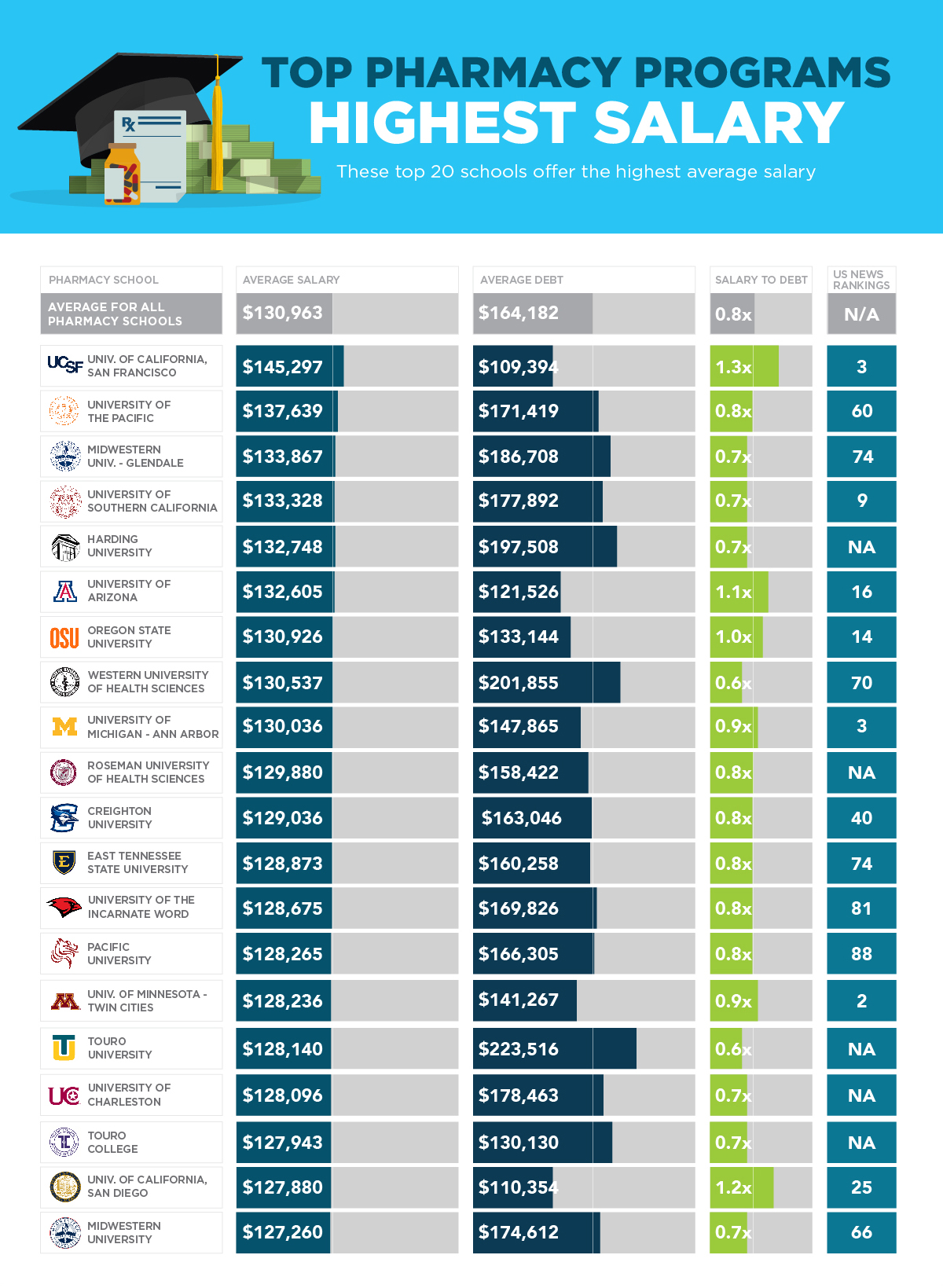 Notice a geographic trend? If you want a big payday after you earn your Pharm.D., you might want to hit the west coast, particularly California. The University of California, San Francisco; University of the Pacific, in Stockton, CA; and the University of Southern California took three of our top five spots with salaries north of $133,000. Midwestern University in Glendale, Arizona (their other campus is in Illinois, hence the Midwestern name), snagged the #3 spot at $133,867. The #5 spot on our high-earners list goes to Harding University in Arkansas, with an average grad salary of $132,748.

But before you pack your bags and go west, young pharmacist, the BLS reports that pharmacists are in demand and paid well across the country. The highest mean salary range for pharmacists is $121,050-$138,910. The BLS lists Alaska, California, New Hampshire, Maine, and Vermont as the top five states for the highest pharmacist salaries in the country.

The good news doesn’t end there. Five of the schools on our highest salaries list (University of Minnesota, Twin Cities; University of Michigan, Ann Arbor; University of California, San Francisco; and the University of Southern California) also made the U.S. News & World Report’s Best Grad Schools list, which is based on surveys completed by academics at peer programs.

A big salary is the cure for big loans

Because the cost of pharmacy school will be a major factor in deciding where you study, we’ve listed below the top 20 schools that offer the best salary-to-debt ratio, which means grads from these schools earn higher salaries and have lower student loan debt. Graduates from more than half the schools topping our list—including North Dakota State University (NDSU), University of Montana, and Southwestern Oklahoma State University—graduate with debt in the five figures as opposed to six. 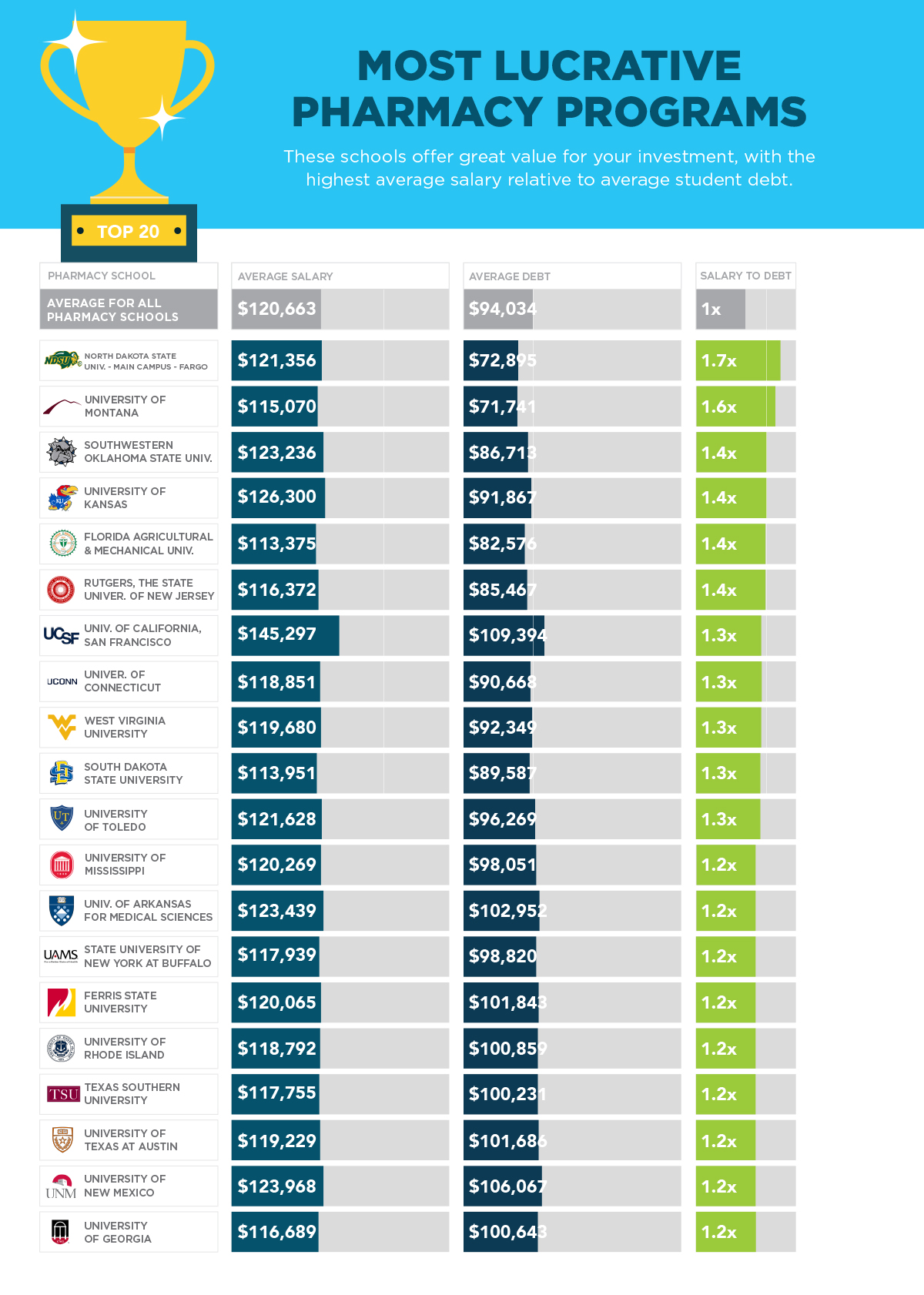 Ample employment opportunities, plus a lower cost of living, can certainly help when it comes to paying down student loans. NDSU might have earned the top ranking on our list because of the healthcare jobs that abound in the area: 81% of 53 counties in North Dakota are short on health professionals.

The numbers from University of Montana could tell a similar story: The need for healthcare workers in the state is growing, so the workforce must increase by 40% over the next decade to meet demand. Southwestern Oklahoma State ranks high likely because Oklahoma has seen a 26.56% increase in pharmacist jobs over the past decade.

Warning: Side effects include painful debt

You know you’ll likely graduate pharmacy school with some debt, but you don’t want that debt to be disproportionate to your earnings. So we’ve analyzed the loan obligation fallout for you. Take a look at this list of schools with the worst salary-to-debt ratios, where alumni shoulder massive debt. 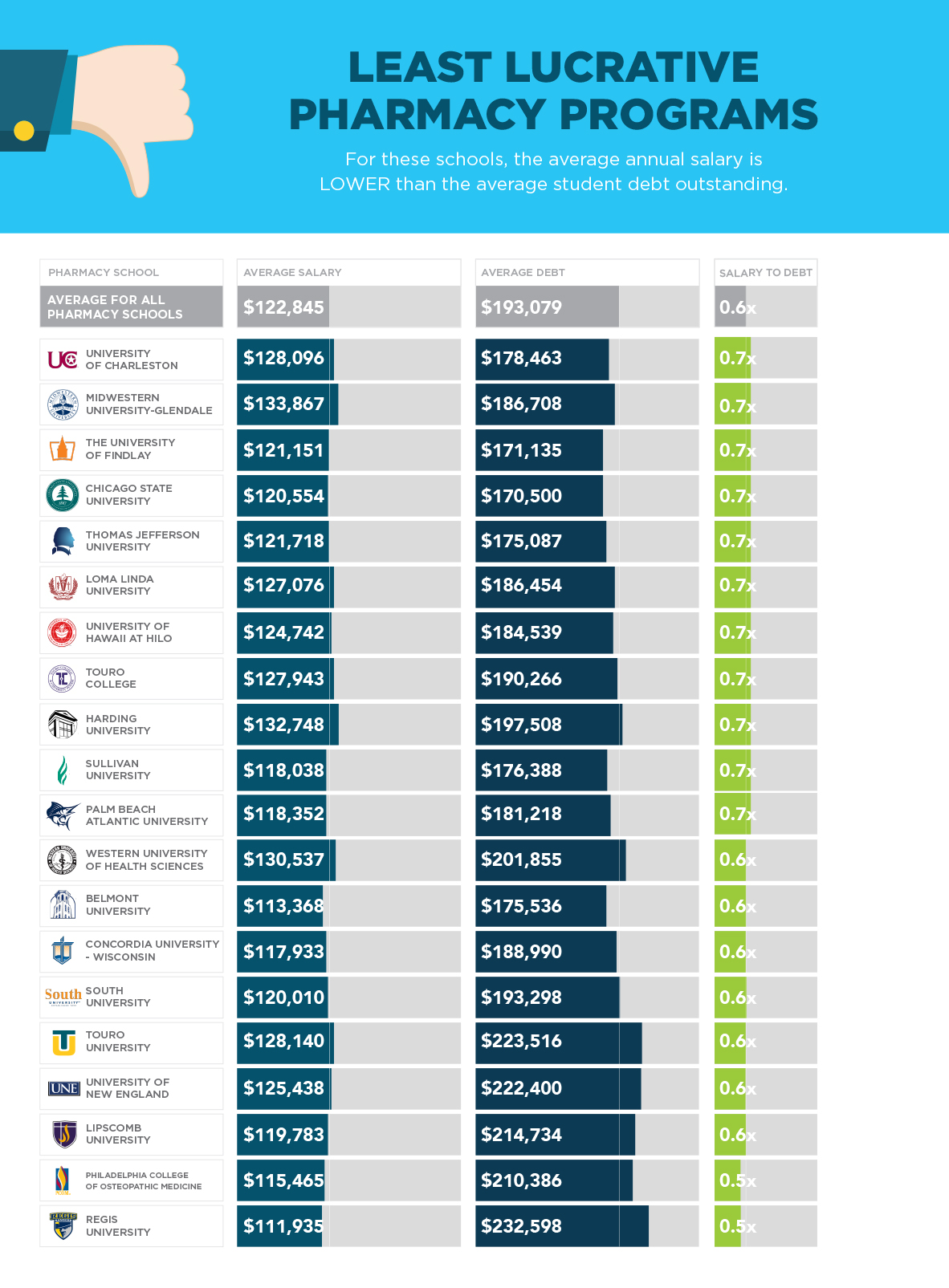 The jaw-dropping conclusion is that alumni from six of the schools on our list—Western University of Health Sciences, Touro University, University of New England, Lipscomb University, Philadelphia College of Osteopathic Medicine, and Regis University—report student debt of over $200,000 and annual earnings far below that number! While grads of Regis University, for example, average a yearly salary of $111,935, they have student loan debt of more than double that amount.

Recommended: Getting The Most Bang For Your Graduate School Bucks

Of those six schools, Western University earned the highest ranking from U.S. News: #70. The others rank far below—Regis University and University of New England tie at #88, while Lipscomb University and Philadelphia College of Osteopathic Medicine barely made the list with another tie at #98.

Pharmacy school is a big investment of both time and money, so to have a better shot at paying off student debt faster, it makes sense to apply to schools where employment opportunities abound and earning potential is high. Pharm.D. graduates are poised to be successful, so choose a school that will prepare you well for a career that fulfills your personal and financial goals.

The best remedy for Pharm.D. school debt is a good payoff plan. Take a look at how refinancing your student loans can help, and then share this article with a pharmacy school alum.

Methodology: The data was gathered from over 19,000 applicants for SoFi student loan refinancing between January 2014 to February 2017. Individuals were divided into degree category cohorts that reflect their graduate degree program. The figures shown in the pharmacy school analysis are based on a pool of applicants who have, on average, three years of work experience since graduation. Degrees and salary are self-reported and only verified at the underwriting stage if the loan is approved.