When shopping for a mortgage, it’s very important to pick a suitable loan product for your unique situation.

Lately, I’ve been discussing loan programs beyond the 30-year fixed, now that interest rates on fixed-rate mortgages are no longer favorable.

Everyone is familiar with the traditional 30-year fixed – it’s a home loan with a 30-year duration and an interest rate that never adjusts the entire loan term. Pretty simple, right?

But what about the 7-year ARM, or more specifically, the 7/1 ARM? It’s an adjustable-rate mortgage and a fixed-rate mortgage, all rolled into one. Sounds a little bit more complicated…

A 7/1 ARM is an adjustable-rate mortgage with a 30-year term that features a fixed interest rate for the first seven years and a variable rate for the remaining 23 years.

Let’s break it down. During the first seven years of the loan term, the mortgage rate is fixed, meaning it won’t change from month-to-month, or even year-to-year.

So if the starting interest rate is 3%, that’s where it will remain until it’s first adjustment in month 85.

For all intents and purposes, the loan program offers borrowers fixed rates for a very lengthy 84 months.

During the remaining 23 years, the rate is adjustable, and can change just once per year.  That’s where the number “1”  in 7/1 ARM comes in.

This makes the 7-year ARM a so-called “hybrid” adjustable-rate mortgage, which is actually good news.

You essentially get the best of both worlds. A lower interest rate thanks to it being an ARM, and a long period where that rate won’t change.

It affords you two additional years of fixed payments when compared to the 5/1 ARM. And those 24 extra months might come in handy…

Note: You may also come across a “7/6 ARM,” which is fixed for the first seven years and then adjusts twice each year (every six months) thereafter. 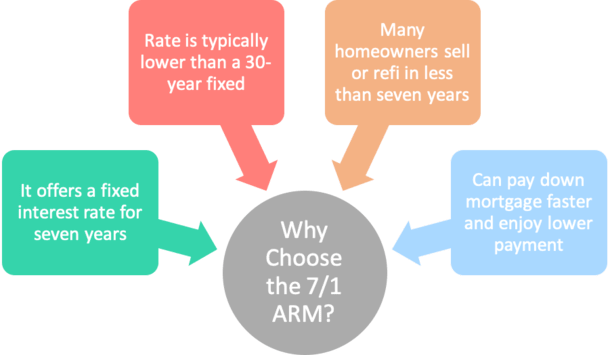 You probably don’t want your mortgage rate (and mortgage payment) to change all the time, especially if your rate increases, which is probably the likelier outcome.

With the 7/1 ARM, you get mortgage rate stability for a full seven years before even having to worry about the first rate adjustment.

And because most homeowners either sell or refinance before that time, it could prove to be a good choice for those looking for a discount.

That’s right, 7/1 ARM mortgage rates are cheaper than the 30-year fixed, or at least they should be.

By cheaper, I mean it comes with a lower interest rate than the 30-year fixed, which equates to a lower monthly mortgage payment for the first 84 months!

As noted, most homeowners don’t keep their home loans that long anyway, so there’s a decent chance the borrower will never see that first adjustment, yet still enjoy that low rate month after month for years.

At the time of this writing, mortgage rates on the 7-year ARM are being offered at around 4%, while the typical rate on a 30-year fixed is about 4.75%.

[What mortgage rate can I expect?]

Over the past several years, fixed interest rates were super low because the Fed pledged to buy up long-term fixed-rate mortgage securities, driving rates down.

As such, ARMs weren’t offering much of a discount (if any) and often weren’t even worth looking into in most cases.

But in normal times, which we’re starting to return to, you might find an even wider spread between the two products.

Let’s look at the math:

Not only would you save long-term, but you’d also save monthly, meaning you could put that extra money to good use somewhere else, such as in a more liquid investment.

Or simply set it aside to pay other bills (like high-interest credit cards) or build up an emergency fund.

Are the Lower 7/1 ARM Rates Worth the Risk? 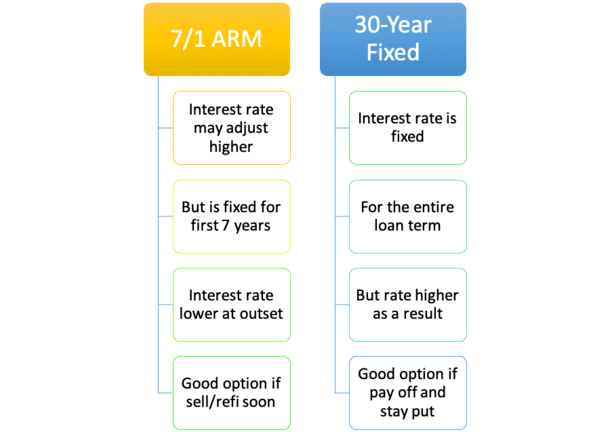 Now let’s talk about 7/1 ARM rates, which are typically cheaper than the 30-year fixed, but how much depends on the current rate environment.

If you actually plan on staying in your home and paying off your mortgage, you face the possibility of an interest rate reset (higher, or lower) in the future.

And you don’t want to get caught out if mortgage rates surge over the next seven years, especially if you can’t sell your home or don’t want to.

However, if you’re like many Americans, who sell or refinance within seven years, the loan program could make a lot of sense, assuming it’s a good time to sell or refinance rates are attractive at some point over those 84 months.

Just be sure to do the math on both scenarios before committing to either of these loan programs.

Sometimes the rate spread between seven-year ARM rates and the 30-year fixed isn’t that wide.

At the moment, the spread is beginning to widen, making adjustable-rate mortgages favorable again.

However, you do need to put in more to shop around because ARM rates can vary a lot more from bank to bank than fixed rates.

If you put in the legwork, you may find a bank or lender willing to offer a more substantial discount.

For example, First Republic Bank does most of its volume in ARMs, and could offer a wider spread versus the competition.

Regardless, this spread can and will fluctuate over time, so always take the time to consider that when making a decision between the two loan programs.

Obviously, the upside is diminished and it gets riskier if the two loan programs are pricing similarly.

Lastly, note that you should be able to afford the fully-indexed rate on a mortgage ARM, should it adjust higher.

After those seven years are up, the interest rate will be calculated using the margin and the index rate (such as SOFR) tied to the loan. This rate could be considerably higher than what you were paying.

In other words, expect and plan for rate increases in the future and make sure you can absorb them if for some reason you don’t sell your home or refinance your mortgage first.

If a rate adjustment isn’t within your budget, or won’t be in the future when it adjusts, you may want to pay it safe with a fixed-rate mortgage instead of the 7/1 ARM.

Believe it or not, seven years can go by pretty fast.

The good news is even if mortgage rate are higher seven years after you take out your loan, you’ll still be pretty far ahead from all the savings realized during that time.

You’ll have a smaller outstanding loan amount thanks to more of your monthly payment going toward the principal balance and you’ll have saved a ton on interest.

So even if refinance rates are higher in the future, or you simply let it ride with a rate adjustment, you may still come out ahead, at least for a little while.

If nothing else, the savings during the first seven years may give you breathing room to pay more in the future, or refinance at more attractive terms.

In summary, the 7-year ARM might not be for the faint of heart, whereas a 30-year fixed is pretty straightforward and stress-free. And that’s why you pay more for it.

If you’re certain you won’t be staying in a property for more than five or so years, it could be a solid alternative and a big money saver if spreads are wide.

To know for sure, use a mortgage calculator to compare the costs of each loan program over your expected tenure in the property.