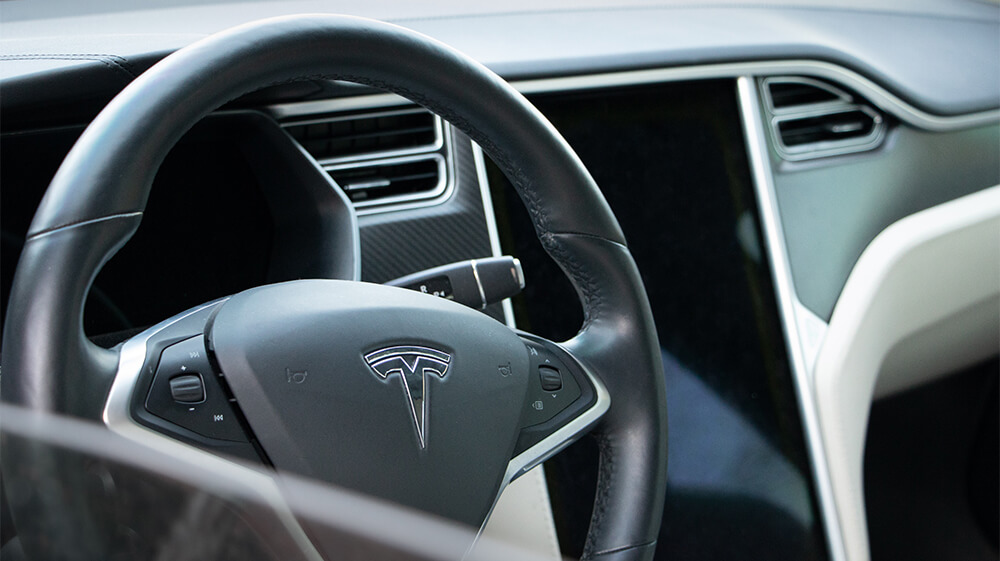 If you look long enough into buying a used Tesla, you’ll definitely come across some debate about Tesla’s MCU1 vs MCU2. Most of the discussion centers around problems with MCU1 regarding failure of the embedded Multi Media Card (eMMC).

Most used Teslas on the market will either have an MCU1 or MCU2 Infotainment system. Tesla has produced two Infotainment units (MCU1 and MCU2, respectively) for the majority of their fleet. The newest unit, MCU3, has been seen in a few new Model S and Model Y vehicles, but MCU2 is still being put on current production vehicles (we’ll look into the specs of the MCU3 in a future article).

In today’s post, we’re going to look at the difference between Tesla’s two main media control units, how to upgrade from MCU1 to MCU2, and what to consider when comparing used Teslas with MCU1 and MCU2.

The MCU1 uses an NVIDIA Tegra 3 CPU and an 8GB eMMC (with many replaced by a 64GB eMMC). It features Tesla’s QtCarBrowser-based platform browser, 3G capability, and an AM / FM / Sirius XM radio antenna.

The major issue that MCU1 needs corrected is potential (probable) eMMC failure. This problem can be solved without an upgrade to MCU2 (though there are several benefits to the upgrade). Because eMMC failure prompted an official recall, a Tesla service center will replace the eMMC daughterboard, upgrading from an 8GB eMMC chip to a 64GB chip for free. Additionally, software updates around 2018 reduced the excessive data logging that caused early chip failure in the first place, meaning that an MCU1 Infotainment system may have plenty of life left, though even Tesla admits that failure for the original eMMC is inevitable.

Most Teslas with MCU1 come with Lifetime Premium Connectivity, but all of these will also need an upgraded LTE modem to use that perk since 3G is no longer available. The current cost to upgrade the modem is about $500.

However, upgrading to Tesla’s MCU2 will eliminate the eMMC issue and include the additional modem upgrade (taking the non-operative 3G connection to LTE).

One final consideration for the MCU1 is that support for Full Self-Driving (FSD) Beta seems absent, and FSD updates are infrequent. If you are hoping to participate as an FSD Beta tester with an MCU1 Tesla, you’ll need to plan to upgrade to the MCU2 in order to get Beta releases. There is some debate on whether MCU1 Teslas with FSD should be getting this upgrade for free, but nothing definitive has come from Tesla as to whether this will happen or not.

Years: 2018-present, though a new MCU3 is currently being used in some Model Y / Model S

The MCU2 uses an Intel Atom E8000 series CPU and a 64GB eMMC and is generally faster and smoother in every way when compared to the MCU1. It features a Google Chromium-based platform browser, 5G, Wi-Fi capability, an external Bluetooth antenna, and capability for FSD Enhanced Driving Visualizations (for those that own or subscribe to FSD).

MCU2 also comes with the capability to use all cameras for DashCam and Sentry mode if the vehicle has the FSD computer.

The enhanced memory and speed of the Tesla MCU2 allows it to include more entertainment media, such as games and video streaming capability (for example: YouTube, Netflix, and Twitch). And while games aren’t traditionally top priority when it comes to cars, the selection available with the MCU2 Tesla Arcade (like Stardew Valley and Cyberpunk 2077) is a pretty awesome perk (thanks, Elon!).

One issue for some Tesla owners is that there is no FM / Sirius XM radio in the MCU2 without extra equipment, which would involve an extra service center visit and $500 (provided the car previously had radio antennae) if you wanted it. It’s worth noting that the MCU2 does not support AM radio even with the radio upgrade.

At the time of writing, there is not an option to upgrade the MCU2 to the MCU3.

How to Upgrade Your Tesla MCU1 to MCU2

You can upgrade your Tesla MCU from MCU1 to MCU2 by scheduling an appointment with a Tesla Service Center through the Tesla app. Current Infotainment Upgrade pricing for Teslas with AP 2.0 or AP 2.5 is $1,500, and for all other Teslas is $2,000.

MCU1 vs. MCU2 in Used Teslas

We do know of a few advantages when it comes to buying a used Tesla with MCU1.

You should have a little bargaining leverage if the MCU1 Tesla hasn’t had its eMMC card replaced yet. And as Teslas with the MCU1 tend to be on the older side, they should be more affordable to begin with.

If a used Tesla is first and foremost an EV to you and you’re not interested in all the extra Infotainment perks, the MCU1’s simpler environment will likely suit you just fine.

For those that just want a discount on an electric car with an eye for energy savings, MCU1 generation Teslas are also the most likely to have Transferable Free Unlimited Supercharging.

What are the cons of having a used Tesla with MCU1? We’ve already mentioned some, but if any of the following are deal-breakers for you, you may want to narrow your search to used Teslas with MCU2 and above or prepare your budget for the upgrade:

Bare minimum, the eMMC may need to be replaced (for free, but it still costs time). If you want mobile connectivity, you’ll also need an upgraded modem (LTE). And since all MCU1 Teslas are 2018 and earlier, it’s possible that they will need extra repairs outside of the infotainment unit (for example, the Model S door handles and the Model X Falcon Wing door assembly are historical problem areas). This greatly depends on how well the previous owner kept up with any issues, of course.

A Tesla with MCU1 needs both a hardware and MCU upgrade to get the latest and greatest software updates for FSD Beta. At the present time, we aren’t aware of any MCU1 Teslas that have been invited to the Beta test.

Even if a previous owner purchased FSD on the promise of feature-complete software later, some of the hardware on your Tesla, while it should be upgraded for free if it’s AP 2.0 or AP 2.5, needs a service center visit to get it ready.

Planning on waiting to see if a feature-complete version of FSD comes out that’s compatible with the MCU1? It might be a while; the eventual fate of MCU1 Teslas with paid FSD, even with upgraded hardware, is still unclear.

The universal shortage of supplies can certainly be a big time and frustration factor if your MCU1 does need replacing. While Tesla does an incredible job of pivoting to meet supply challenges, their first priority isn’t retrofits—it’s new production. A replacement MCU1 may take a while for the Tesla service center to get in stock.

Finding A Used Tesla with MCU1 or MCU2

It can be a little tricky to tell if the Tesla you’re looking at online has MCU1 or MCU2. With many owners deciding to take the plunge and upgrade to MCU2 to avoid having an eMMC crisis, the model year of a used Tesla isn’t always enough to tell you which MCU it has.

However, there are a few ways to search through our listings at Find My Electric to narrow things down:

For pre-2019 vehicles, only the Model S and Model X had MCU1. Model 3 started its production with an MCU2. After selecting the right year(s), filtering for the Model S or Model X keeps you in MCU1 territory.

For further information, you can check the VIN of the vehicle you are interested in to see if there is an “unrepaired recall” associated with the eMMC. If so, you’re likely dealing with an MCU1. If not, the owner either got the new 64GB eMMC or opted for an MCU2 upgrade, and they should be able to provide you with more information on their Tesla (to learn more about the recall and how to tell which MCU you have, check out our article “Tesla MCU1 eMMC Failure Explained”).

We hope this discussion on MCU1 vs MCU2 was helpful to you in your search for the perfect used Tesla. And hey, whether you want a Tesla with transferable FSD to try out for FSD Beta or feel like jumping on the Model X bandwagon (right now, it’s the fastest selling used EV out there), we’ve got you covered. See what’s available today!