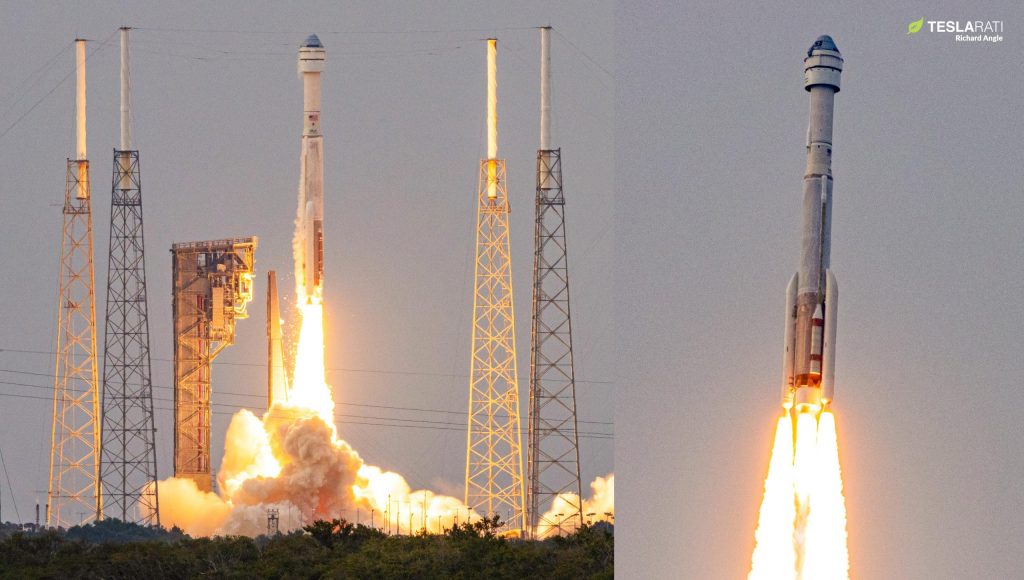 More than three years after SpaceX’s Crew Dragon spacecraft first safely reached orbit and almost three and a half years after Boeing’s Starliner crew capsule’s ill-fated launch debut, Boeing has finally returned to flight and made it farther than ever before towards a successful test flight.

Another six minutes later, Centaur shut down and Starliner ultimately separated from the rocket a bit less than 12 minutes after liftoff. Unlike SpaceX’s Crew Dragon, though, Starliner separated from its launch vehicle before reaching orbit – a task Boeing engineers chose to reserve for the spacecraft itself to limit stress on the spacecraft and crew in the event of a high-altitude abort. However, that design decision also adds significant risk in other ways and – after the spacecraft’s extremely poor performance during its first launch attempt – turns a Starliner launch into a sort of 30-minute cliffhanger.

While just a hair shy of true orbit, Starliner’s suborbital launch trajectory means that whether or not it wants to, the spacecraft will reenter Earth’s atmosphere about an hour after liftoff if it can’t complete a minute-long orbital insertion burn. In the case of OFT-2, that burn came about 31 minutes after liftoff and was thankfully successful, inserting Starliner into a stable, circular orbit and undoubtedly triggering a massive wave of relief for all employees involved. From that stable orbit, Starliner can finally begin to prepare to rendezvous with the International Space Station (ISS) for the first time ever.

The story of Starliner’s tortured orbital flight test (OFT) campaign began in earnest on December 20th, 2019, when an uncrewed prototype of the Boeing spacecraft first attempted to launch to the International Space Station (ISS) atop a United Launch Alliance (ULA) Atlas V rocket. Infamously, a major software bug that could have been easily detected with even the most basic integrated hardware-in-the-loop prelaunch testing caused Starliner to lose control the moment it separated from Atlas V. Only through a heroic last-second effort was Boeing able to insert Starliner into orbit and prevent the spacecraft from reentering prematurely, which would have likely destroyed it. After hundreds of seconds of unplanned burns of its many attitude control thrusters, Starliner no longer had enough propellant to safely reach the ISS.

Boeing would later correct another completely unrelated software bug mere hours before Starliner’s planned reentry and recovery. If undetected, it could have caused the spacecraft’s capsule and service sections to crash into each other shortly after separation, potentially damaging the capsule’s heat shield and dooming it to destruction during reentry. Had astronauts been aboard, either of the two software bugs could have potentially resulted in crew fatalities and total mission failure. Instead, through a combination of sheer luck and a quick emergency response from Boeing and NASA teams, the spacecraft was saved and recovered in New Mexico.

On a positive note, aside from raising deep and foreboding questions about Boeing’s software development and integrating testing capabilities and NASA’s inept and inconsistent oversight, OFT-1 did still demonstrate that Starliner was able to reach orbit, operate in space, deorbit, survive atmospheric reentry, and land softly under parachutes.

However, the problems were about to continue and spread beyond software. On July 30th, 2021, shortly before a different uncrewed Starliner was scheduled to reattempt the first Orbital Flight Test, the launch was aborted. Eventually, Boeing and NASA reported that 13 of Starliner’s 24 main oxidizer valves had failed to open during a prelaunch test just a few hours before liftoff. The resulting investigation ultimately concluded that the Aerojet Rocketdyne-supplied valves had a faulty design and that Boeing had failed to properly insulate those valves from humidity and water intrusion. It also delayed the next OFT-2 launch attempt by almost ten months.

But finally, after almost 30 months of work to rectify those software and hardware failures, Starliner has intentionally reached a stable orbit without running into a major problem – certainly cause for some amount of optimism. Still, safely rendezvousing and docking with the ISS may be the biggest and riskiest challenge Starliner has faced yet and Boeing will be attempting the feat for the first time in its modern history. Starliner is expected to begin proximity operations around 3 pm EDT on May 20th. If the first attempt is perfect, docking could occur as early as 7:10 pm EDT.

Ultimately, even if Boeing is now more than three years behind SpaceX, whose Crew Dragon spacecraft first reached orbit and the ISS in March 2019 and launched its first astronauts in May 2020, it’s essential that NASA has two redundant crew vehicles available to carry its astronauts to and from the station. SpaceX’s extraordinary success and heroic efforts have allowed the company to singlehandedly ensure NASA access to the ISS since November 2020, but no complex system is perfect and even a failure outside of SpaceX’s control could trigger a long delay that could threaten NASA’s uninterrupted presence on the International Space Station.

NASA has contracts with SpaceX to maintain that uninterrupted presence at the ISS through Crew Dragon’s Crew-7 mission, which could launch as early as September 2023 and would then return to Earth around March 2024. If OFT-2 is completed without significant issue, Boeing’s next priority is Starliner’s Crew Flight Test (CFT), a crewed launch debut that could happen before the end of 2022.